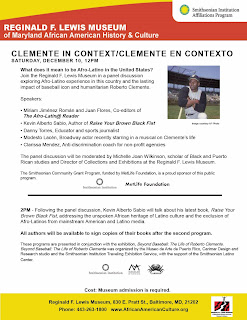 Clemente In Context is a panel discussion and book lecture that will be held at the Reginald F. Lewis Museum of African American Culture.  This event will be held on December 10, 2011, from 12pm to 4:30pm.  The Lewis Museum is located at 830 East Pratt Street in Baltimore, Maryland.

Clemente In Context profiles the life of Major League Baseball great Roberto Clemente; both his athletic prowess on the field, and his humanitarianism off of it. This event will also highlight the struggles that he faced, as well as other African Americans and Afro Latinos in general, the struggles and trial and tribulations with bigotry & segregation in his time, as well as contemporary struggles.  The panel discussion will include sports journalist Danny Torres, actor Modesto Lacen (who currently stars in a play on Broadway about Clemente's life), and author/activist Kevin Alberto Sabio.

Following the panel discussion will be a book lecture based on the book "Raise Your Brown Black Fist: The Political Shouts of an Angry Afro Latino", authored by Kevin Alberto Sabio.  He will be speaking on the struggles of Afro Latino identity, and the issues Afro Latinos face in gaining recognition and acceptance from the mainstream society, and also the Black and greater Latino communities.

The event is FREE, with standard museum admission ($8, $6 for students). Books by participating authors will be available for sale at the event.

Clemente In Context is part of a broader exhibit at the Reginald F Lewis Museum; Beyond Baseball: The Life of Roberto Clemente, and Indivisible: African-Native American Lives in the Americas.  Both exhibits will be showing at the Lewis Museum until December 30th.

Universal Africana Literary Arts Movement & Expo
We are an independent grassroots event aimed at highlighting and promoting the endeavors of African descended people in the various fields and industry of literature; from authorship, to publishing, to distribution. The movement was conceived in 2007, and started out as a literary arts festival in 2008 (originally based in Richmond, VA). Since that time, we have expanded on our original concept, and have relocated to Baltimore, MD. Created due to the lack of Black-owned bookstores in the local area, and Black-owned media in general, the original festival was conceived and held. We have now turned that one-time event into a consistent movement.